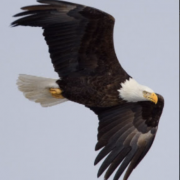 The Top 5 Birds to Watch for This Winter

Pollinator Citizen Science Projects: How You Can Help
Scroll to top